Written for Microcosms, this story was quite a fun one to write. Not quite unicorns and rainbows, though…

For those who missed yesterday’s post, I’m giving the story first and the “behind the scenes” afterwards.

Fiction: The Book of Damnation

Welstandsuitsig Abbey had been built upon a tall pinnacle. Waking and sleeping in shifts, they shared in the work around the abbey all the while tending to the Abbess who sat in the highest room writing blindly in the Vedoemenis Boek all that happened – and would still happen – in the world below.

He came at midday, raw fingers and knuckles leaving bloody specks on the stone as he climbed the height of the rock to reach the abbey.

Two of the sisters helped him to the Abbess who still sat in front of the enormous book.

“I’ve come for the machine,” he said, barely greeting her.

She blessed him before simply stating ‘no’.

“You know what is happening down there,” he said. “People are slaughtering one another! The world is coming to an end”

“And you would stop it?”

“And? Would I then simply rip out the page, forgetting all it said?”

The Abbess stepped closer to the window.

“Come here and see what I see.”

The man sighed, went over to the window. The Abbess nodded and the sisters pushed him out. With a heart-wrenching scream, he plunged to his death.

The Abbess sat down at the Verdoemenis Boek once more and started writing.

When they had left, the Abbess started to write their world’s doom once more, the sisters’ murder slipping into oblivion between the lines she wrote, taking the murder upon herself only.

“The Book of Damnation” was one where I played around with a bunch of elements just for fun, basically. The prompts were “abbey”, “mountaineer”, and “diary”.

I immediately thought of Meteora when I read “abbey” and “mountaineer”, but had to cut quite a bit of the description as I only had 300 words for the whole story. Calling it Welstandsuitsig was more of a joke to myself (and people who can read Afrikaans) as it means “Wellness view”. It’s the small things…

Verdoemenis Boek is also Afrikaans and added just to give it an otherworldly feel along with Welstandsuitsig and it literally means “Book of Damnation”. I wanted it to be almost a magical tome, set against the “scientific world” of the time machine.

The brain is also a weird thing when it comes to recalling something while you’re writing. So often I have no idea where something came from, but, for instance, the lines: “’People are slaughtering one another! The world is coming to an end’” is distinctly influences by the one stanza of Völuspa in the Poetic Edda where the coming of Ragnarok is described along with Fimbulventr. 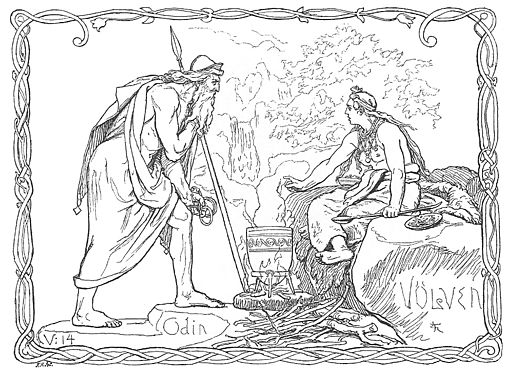 The time machine itself came as a bit of a surprise to me. I had no idea what the abbey was guarding until I came to the part where I realised maybe the “mountaineer” had been sent to try and save the world…

I hope to take part in Microcosms again this Friday and will then post the story next week Tuesday.

Happy Hobbit Day 2021 everyone!
It's the countdown to Hobbit Day 2021, so I give you the newly reordered shelves of Tolkien, Old Norse stuff, Old English stuff, as well as my Golden Bough, Kalevala, and Celtic myth books 😀😍🤩 Beware the barbarian tribes with those history books! 😬😜 Narnia also sneaks in... 🦁
The last of the season's pansies in my sister's garden 😍😍😍
My current crochet WIP... okay, one of them. Definitely the largest of them! I have about 15 rows to go still.
One of the earlier maps that I drew for The Ruon Chronicles 😀
Happy Spring Day! Gelukkige Lentedag! 🌸🦋🤩
Sending some fantasy fiction to writer-friend @_sam.west 🤩☕🍪
Finally starting this book today! It's story research (for Ruon Chronicles), new story fodder, and one of those books that I just want to read because I know that it'll be interesting. 😁 🤓