Welcome to week 20 of the Folklore and Mythology Thursday blogposts. This week I’ll focus on figures from myth and folklore whose names start with ‘t’, including; Tiresias, Tuatha Dé Danann, Tapio, Triglav, Tuoni, Tahmuras, the Thens, and Tengu.

The son of the nymph Chariclo and Everes, Tiresias is the blind seer of Thebes who was so wise “that even his ghost had kept his wits, and [had] not been overcome by forgetfulness like other inhabitants of the underworld” (Cotterell & Storm, 2007:88). Tiresius plays a part in various myths, including:

There are various stories which explains Tiresias’s blindness. In one of these myths Tiresias is blinded by the goddess Hera, but given a long life and the gift of prophecy by the god Zeus (see Cotterell & Storm, 2007:88).

The Tuatha Dé Danann (’people of the goddess Dana’) “were the last generation of gods to rule Ireland before the invasion of the sons of Milesius, the ancestors of the present-day Irish”(Cotterell & Storm, 2007:172). Cotterell & Storm (2007:172) notes that the Tuatha Dé Danann overcame the Fomorii at the second battle of Magh Tuireadh “largely because of their superior magic”.

After their defeat by the Milesians, the Tuatha Dé Danann went underground, living beneath grassy mounds that contained a “sidhe, a subterranean court which glittered with wonders within” (Cotterell & Storm, 2007:172). See also The Mammoth Book of Celtic Myths and Legends by P.B. Ellis (2002).

Moving on to Iranian mythology, Tahmuras is the son of Hoashyanga (the fir 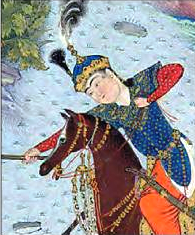 The myths of the Thens also contains a great flood myth (see Cotterell & Storm, 2007:479) (similar to that in the Bible and the Epic of Gilgamesh).

“The three great men taught the people how to cultivate fields and how to weave” (Cotterell & Storm, 2007:479). For further myths about the Thens, the coming of the different peoples and how other skills were taught to the Thais, see Cotterell & Storm (2007:479).

In Japanese folklore the Tengu are supernatural creatures that are sometimes worshipped as Shinto kami (see Rosen, 2009:373). “Tengu are usually depicted as kites or other birds of prey, but, even in bird form, they often have human characteristics. Their bird beak may become a long nose or they may have a human body with a bird’s wings, head, or beak. As Kami, Tengu may take the form of beaked, winged figures with snakes wrapped around their limbs, riding a fox” (Rosen, 2009:373).

The Kalevala translation I have read and thoroughly enjoyed is the Oxford World Classics version.

The Mammoth Book of Celtic Myths and Legends by P.B. Ellis (2002) is also a book I have read, enjoyed and can recommend.