They brought me with them to the new colony unwittingly. My job has always been to gather the souls of those whose time ran out, to separate the living from the dead. I was a relic of the old planet they had nearly forgotten about. With all their healthcare technology they had forgotten just how close a reaper could be. I stayed outside the living quarters, walking out in the open underneath strange stars or sitting unseen in the warm rays of a new sun during the day. It was a new world for me as well, after all.

I hated the mine shafts where humans crawled in and out like ants; devouring the ground like maggots. But that seemed to be all they came here to do — mine for minerals and resources no longer available at home. Dangerous work. A few times I took a couple of the working-age humans. Down in the dark of the collapsed tunnels their voices quieted as I severed the strands that bound their souls to their corpses. I heard whispers between the other humans. Strange fears about knocking sounds they heard when they went down into the tunnels and all the machinery was quiet. They started locking the doors at night, afraid of someone knocking.

The ships bringing the food and medicine from the home planet far away came less and less regularly. Rationing started. Winter came slowly. No ships came for seasons on end. I watched the humans scramble in panic. Then stop. Then seemingly stopping to care at all. The food they’d planted did not grow. The rationing became severe. And then a woman was carried to the forest for the first time.

They had carried her away from the housing, past the mine to where a copse of trees stood beyond their graveyard. There they placed her on the ground in a makeshift bower. She stared at the trees until night came and then stared at the stars and started to cry.She seemed to sense me sitting next to her. And I realised that they would not be returning for her. So I sat with her and sang a song I remembered hearing her sing to the children of the new generation. I sat with the old woman for three days before she at last passed away. I sang and sang until she fell into her final sleep and I severed the ties as her time ran out. I don’t know if she heard me, but she seemed to be calmer when I sang. I kept the song in my head in case it happened again. And, when the ships still didn’t show up, it did happen again.

One by one the infirm were carried to the trees.

One by one laid down.

Those too young to have seen a week’s sunrises.

I sang to them as their human emotions started strangling me. Anger, hatred, fear. I did not wait for their time to run out anymore, simply waited for the stars to come into view. They all seemed to like the stars and stared at them as if they were guardians looking down and keeping watch over their prone forms.

After some time I had sung the song so many times that it sounded in the breeze rustling the leaves and I knew they could all now hear the old woman’s song drifting from the forest. I severed the souls as soon as I could, letting them drift off to a better place. A place where I could never go.

Seasons came and went as years spun by. New ships did not come. But the crops were growing better. The rationing weren’t as strict. The new world was slowly starting to come together. But the dying were still brought to me. It had become what was done when there was someone too ill to have any hope of surviving very long. They were brought to the Singing Forest where songs lived between the branches.

They tried to placate me as if I was the one letting someone’s time run out. They brought the dead trinkets they used to love and hung mirrors in the trees that twinkled in the sunshine until the woods seemed filled with stars. They made tombstones and raised them at the edge of the woods. Naughty children were taught not to go out in the night or during storms because the woman of the forest would catch them and eat them. No-one spoke of the ration ships coming again. They, too, had become only a story.

Then the illness came, borne on the last ship ever to leave the old planet for the new colony. The nightmare of those first years was to repeat itself. One by one those whom I had watched grow up or grow old were carried to me. Pestilence had come and though I could not see him, I knew he was there and that he would not stop. I had seen it many times before. This time, however, I would not stand idly by and wait for them to come to me.

They never thought that I would enter their houses to claim them and cut the strings of their lives. They never thought that this would become the grave where their bones would rot for eternity. I followed Pestilence through the doors of the houses and left the dead in my wake. I stalked the corridors and sang the song of the old woman. And I severed their souls where they stood before they had a chance to suffer under Pestilence’s hand. Once everyone was dead he simply faded away, leaving me on my own in the silence.

Now I walk alone through the dilapidated buildings, crumbling mine shafts, and the forest where the dead and the mirrors remain a silent reminder of the lives lived here. Now, at last, I can rest — away from pain, anger, and fear. Now I can sing other melodies. Now there would be no more death. 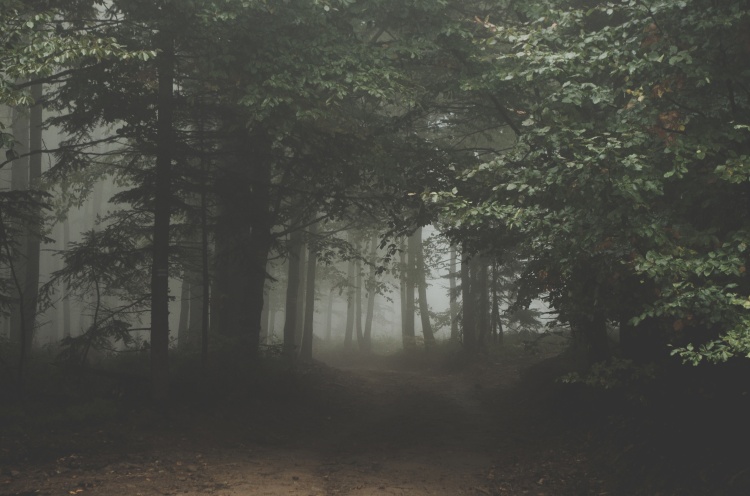