You can read Worldbuilding Wednesday: Winged Creatures in Myth and Folklore Part 1 over here. In the first part of these posts about winged creatures in mythology and folklore, I covered the firebird, lamassu, buraq, simurg, and benu bird. In this second part I’m covering griffins, hippogriffs, Garuda, harpies, and the alkonost.

Griffins are legendary creatures with the body, tail and back legs (sometimes front as well) of a lion; the head and wings of an eagle and also has eagle’s talons as its front feet. “Because the lion was traditionally considered the king of the beasts and the eagle the king of birds, the griffin was thought to be an especially powerful and majestic creature. The griffin was also thought of as king of all creatures.”

Griffins serve as a symbol of divine power and guardian of the divine and are also known for guarding treasure and priceless possessions. Furthermore, “[a]ccording to Stephen Friar’s New Dictionary of Heraldry, a griffin’s claw was believed to have medicinal properties and one of its feathers could restore sight to the blind.Goblets fashioned from griffin claws (actually antelope horns) and griffin eggs (actually ostrich eggs) were highly prized in medieval European courts.”

The griffin is most common in the “art and lore of Ancient Greece”, but representations of the creature have also been found in “Ancient Persian and Ancient Egyptian art dating back to before 3000 BC”.

Hippogriffs are said to be the offspring of a griffon and a horse and “has the front quarters of an eagle and the hind quarters of a horse … The first recorded mention of the hippogriff was made by the Latin poet Virgil in his Eclogues. Though sometimes depicted during the Classical Era and during the rule of the Merovingians, it was used Ludovico Ariosto in his

In Orlando Furioso, the hippogriff flies as fast as lightning (Rosen, 2009:119) and serves “as the mount of the wizard Atlante and carries the poem’s heroes on quests to rescue various maidens” (Rosen, 2009:119).

The Garuda is a human-bird hybrid or “humanoid hybrid” creature that “appears in both Hinduism and Buddhism.” (Rosen, 2009:158)

“The story of Garuda‘s birth and deeds is told in the first book of the great epic Mahabharata. According to the epic, when Garuda first burst forth from his egg, he appeared as a raging inferno equal to the cosmic conflagration that consumes the world at the end of every age. Frightened, the gods begged him for mercy. Garuda, hearing their plea, reduced himself in size and energy … Throughout the Mahabharata, Garuda is invoked as a symbol of impetuous violent force, of speed, and of martial prowess.” Krishna is even said to carry the image of Garuda on his banner.

“In Buddhist mythology, the Garuda (Pāli: garuḷā) are enormous predatory birds with intelligence and social organization. Another name for the Garuda is suparṇa

Rosen (2009:159) further states in The Mythological Creatures Bible, that, “In Tibetan Buddhism, the Garuda is often depicted with a bulging belly and big eyes, short blue horns, and yellow hair standing on end.”

“In Greek mythology and Roman mythology, a harpy was a female monster in the form of a bird with a human face.” Pottery art depicting the harpies featured beautiful women with wings.

Rosen (2009:154) describes them as “hideous creatures with bodies of birds and the white faces of women who are pale with a hunger that can never be satisfied”. The ugliness of harpies (”e.g. in Aeschylus’ The Eumenides”) are, however, a later development, with Roman and Byzantine writers detailing their ugliness.

Harpies are said to be the offspring of Echidna and Typhon. Echidna is the mother of all monsters in Greek mythology, while Typhon is a monster with a hundred snake-like heads (Rosen, 2009:91). 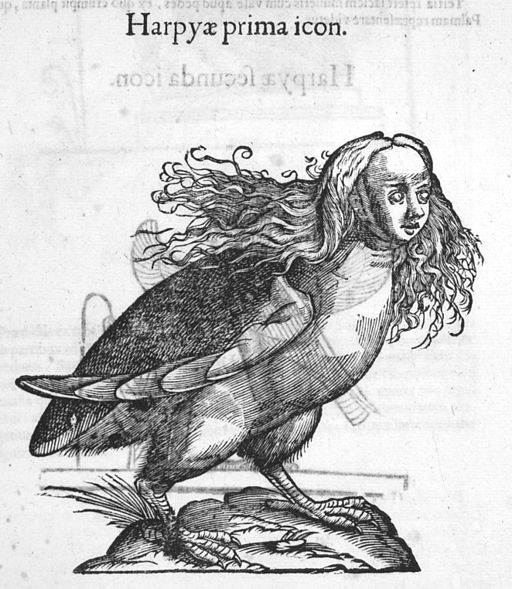 Another human-bird hybrid is called the Alkonost and is a Russian mythical creature. Like the harpies, the alkonost is “a creature with the body of a bird and the head of a beautiful woman.” It has a song that is “so enchanting that those who hear it want nothing more.”

“The name of the alkonost came from a Greek demigoddess whose name was Alcyone. In Greek mythology, Alcyone was transformed by the gods into a kingfisher.”

The alkonost lives in the underworld, but “lays her eggs on a beach and then rolls them into the sea. When the alkonost’s eggs hatch, a thunderstorm sets in and the sea becomes so rough that it is untravelable.”